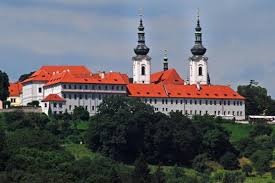 After being in the Holy Land the Olomouc Bishop JIndřich Zdík wanted to found a monastery of regular canons in Prague and therefore he had the support of the Duke of Bohemia – Soběslav I and also his successor Vladislav II. He was able to do it through the Premonstratensians who came here from Steinfeld in Germany (which influenced the Czech political, religious, and cultural history.

Middle age of the Strahov Monastery

The monastery was badly damaged in the 13th century by fire so it was renewed. However, during the Hussite wars it was attacked in the early 15th century and it was burned again. The attempts to get the monastery to life were not successful during the reign of George of Poděbrady. The abbot Jan Lohelius made breakthrough. He was devoted to Strahov so he reconstructed the church, the abbey buildings. His enormous work continued during the new abbot Kašpar Questenberg who founded a new St.Elizabeth’s Hospital.

The Premonstratensian transferred the remains of St. Norbert, the founder of the order in here.

In the 17th century a great philosopher and theologian Jeroným Hirnheim (the abbot of Strahov) started to found a magic library so-called Theological Hall which surived up to now. In the 18th century Václav Mayer was the abbot and his outstanding and devoted work was the building of the new library which is now in Classical style and is named Philosophical Hall.

During the communist regime, the religious was interned and placed in civil employment. The Strahov Monastery was changed into the Memorial of National Literature.

After the Velvet Revolution

After the Velvet Revolution the monastery itself became the Premonostratensian Monastery again. In 1990s the church was restored and the Strahov library renewed.