The end of the Second World War in Czechoslovakia 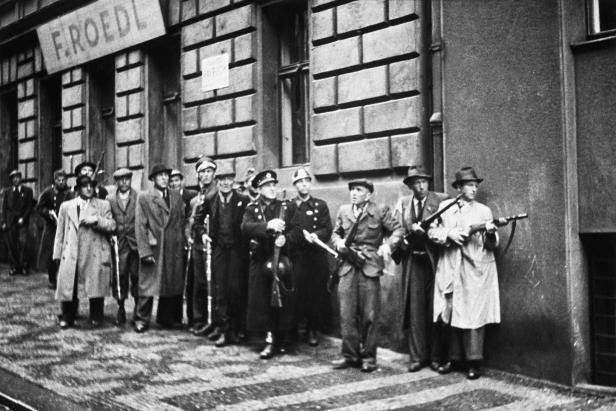 The Slovak National Uprising which took part from August to October 1944 was the armed struggle of rebel Slovak troops against Nazi German Wehrmacht and was situated in Banská Bystrica.

The end of the war

On May 1944 Edvard Beneš signed an agreement that the Soviet Union will liberate Czechoslovak territory. On 21st of September, Czechoslovak troops formed in the Soviet Union liberated the village Kalinov (near Dukla Pass). And gradually Czechoslovakia was liberated by Soviet troops; however, southwestern parts of Bohemia were liberated by other Allied troops from the west. There were massacres at the end of the war when German troops killed Czech people when pulling back from Czechoslovakia. There were massacres in Trhová Kamenice or in Javoříčko.

On 5th of May 1945 the Prague uprising was bursted out as the symbol of the Czech resistence and the attempt to liberate the capital from the Nazi occupation. The uprising lasted until 8th of May 1945 which end in a ceasefire just one day before the Soviet troops arrived and only a day after the Victory of Europe against the Nazi ideology.